Dr. Jack Baldwin was raised in North Dakota and would often spend his summertime with his family at their Minnesota lake cabin. The memories of fixing and tinkering with various projects around their summer home made him fall in love with Minnesota, and he is pleased to now call it his home. Dr. Baldwin graduated from the University of Minnesota school of Dentistry with a DDS. Since graduating Dr. Baldwin, and his two girls enjoy their home by the Lake Minnetonka and love outings in Excelsior. Some of his favorite pastimes include cooking (he loves spicy food) and spending time with his family. Dr. Baldwin looks forward to caring for Plymouth and the surrounding communities by providing the best in dental care to existing and new patients for years to come.

Having grown up on hobby farms and lakes, Dr. Scott Scharf has quite an appreciation for Minnesota’s outdoors. He currently lives on a small lake west of Medina with his wife Jennifer and five children. The whole family loves to fish, swim, camp, waterski and be outdoors. He loves the fact that many of his dental patients share his love for the outdoors as many of them are from Wayzata, Maple Grove, Minnetonka and other western Hennepin County cities that also have a wealth of outdoor opportunities.

Dr. Scharf was born and raised in Rochester, Minnesota. His father worked for IBM and twice moved for 18 month projects that he was involved in. The first move was to the San Francisco Bay Area and the second was to Milan, Italy. However, the family always came back to Minnesota. Dr. Scharf attended the University of Minnesota, both as an undergrad and in the School of Dentistry Program. Upon graduating in 1986, He went out on his own and started Xenium Dental in Plymouth, Minnesota. After 14 years in that location, we moved in April of 2003 to our new, state of the art facility and renamed the practice Northwoods Dental. 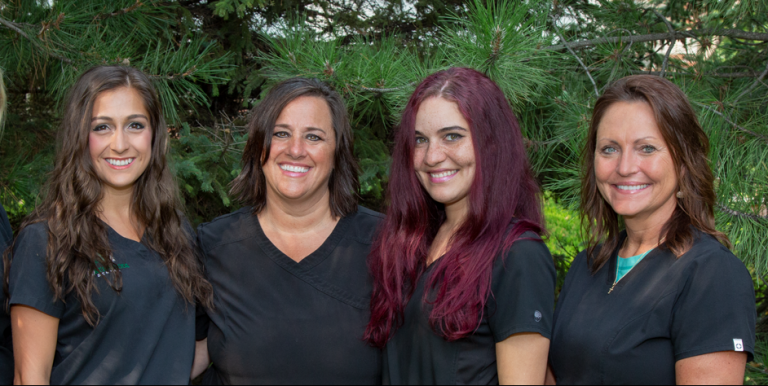 Shannon grew up in St. Cloud, Minnesota and moved to Portland, Oregon for five years, where she started her dental career in 1993. She moved back to Minnesota to start her family and she has two amazing kids. Shannon has been part of the Northwoods Dental team for many years. She loves the outdoors and spending time with her family and friends

Nicole grew up in Duluth, MN and moved to the Twin Cities after graduating with a business degree from the University of
Minnesota-Duluth. She currently lives in downtown Minneapolis and loves all that the city has to offer. When she’s not at Northwoods Dental, she loves spending time with her family, friends, and new rescue pup, Brighton, running, traveling, and checking out new restaurants and breweries.

Joy has been a part of our Northwoods Dental family since 2019.  Joy resides in Annandale with her husband, Don.  In her spare time Joy enjoys walking with her three labs, pheasant hunting, yoga, dancing and spending as much time as possible with her family and grandchildren.

Kristin grew up in Robbinsdale, Minnesota where she currently resides with her 13 year old son, 2 cats, 1 dog, and bearded dragon. In her spare time she enjoys taking walks with her pup, playing bingo, watching her son play sports, and spending time with her family.

Tori grew up in Forest Lake, Minnesota and now resides in Milaca with her 8 year old son, 2 dogs and 3 horses. Outside of work she enjoys traveling, camping, spending time with family and friends and is competitive in Rodeo/Barrel Racing.

Liliya was born in Ukraine and moved to the United States in 1991 with her parents. She now lives in the Northwest suburbs with her husband of seven years. Liliya graduated from Herzing University in 2003 with a dental assisting degree. She enjoys watching movies and bike riding.

I grew up in Rockford, MN and now reside in Waverly, MN. I graduated from Hennepin Technical College and have been a part of the Northwoods Dental Family since 2018. In my spare time I enjoy exercising, going to the cabin, watching football, and spending time with my bulldog Chuck

Tatyana grew up in Kazakhstan and came to the US in 2003.

Tatyana graduated as a LDA from Hennepin Tech. in 2009 and has been working with Dr. Scharf since 2013.

Tatyana loves spending time with her family, staying active outdoors and having her own mini garden with vegetables. Tatyana also has her hands full with 3 kids and a puppy named Teddy Bear.

Jenny has been assisting at Northwoods Dental for over 12 years. She lives in St. Michael with her husband and son. In her free time she enjoys reading, scrapbooking, watching movies and most of all spending it with her family.

I was born and raised in South Dakota. I graduated from MN State Mankato in 2004 with a BS degree in DH. I am married to my high school sweetheart and we have lived in Plymouth for 3 years. I have 2 children who love to play basketball and baseball. I enjoy reading, exercising and trying new restaurants

Phanessa grew up in Greenfield, MN along the Crow River. She now lives in St. Louis Park with her husband and are expecting their first child in May 2019. In her spare time, she enjoys spending time with her family and friends. She enjoys working out and playing co-ed softball in the summer!

Phanessa graduated as a dental hygienist in 2012 and has been with our office since 2013. Phanessa is a world traveler and has been to visit her family in Taiwan and Germany many times.

I attained my dental hygiene degree from Minnesota State, Mankato in 1995. I recently joined the team at Northwoods Dental and love it here! My passion for dental health revolves around patient education. Specifically, how oral health effects the entire person. I focus not only on cleaning teeth but nutrition, stress and sleep issues to name a few.

I live in St. Michael with my husband, Shawn, and son Bryce. We sent our oldest daughter off to college at NDSU at the end of August 2021.I enjoy spending time with my boys, supporting my son and daughter in their sports and volunteering in various groups and at my church.In my free time, I like to weight train, garden, sip on a good glass of wine and spend time with friends on the lake.

I grew up in the Brainerd Lakes Area where I spent a lot of time on the Whitefish Chain of Lakes. I enjoy the outdoors and grew up hunting and fishing! I spend most my time with family, playing sports or board games, crafts, and cooking. I graduated from Herzing University with my Bachelor of Science in Dental Hygiene and joined the Northwoods Dental family shortly after!

We'll Take Good Care Of You and Your Family!